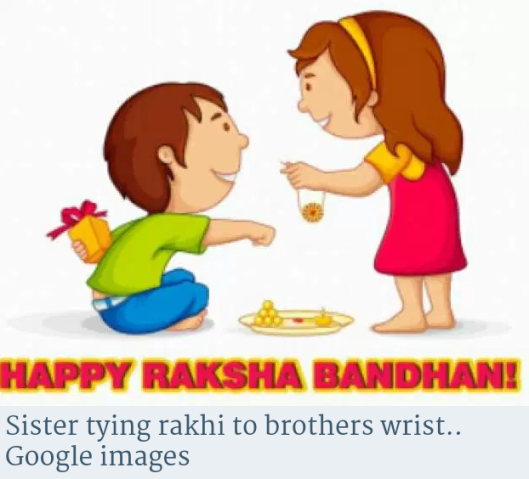 With the festive season beginning in India.. back to back posts..

Raksha Bandhan is a Hindu festival that celebrates the love and duty between brothers and sisters; the festival is also popularly used to celebrate any brother-sister relationship between men and women who are relatives or biologically unrelated.

Raksha Bandhan in Sanskrit literally means “The tie or knot of protection”.

On Raksha Bandhan, sisters tie a Rakhi (sacred thread) on her brother’s wrist, then prays to express her love and her wish for the well being of her brother; in return, the brother ritually pledges to protect and take care of his sister under all circumstances.

We have been celebrating Rakhi at our home since I can remember..

I have an elder brother..

So a week or few days before, the shops are laden with “Rakhis” 〰 that is the scared thread which we tie.

It  comes in all colours and designs. 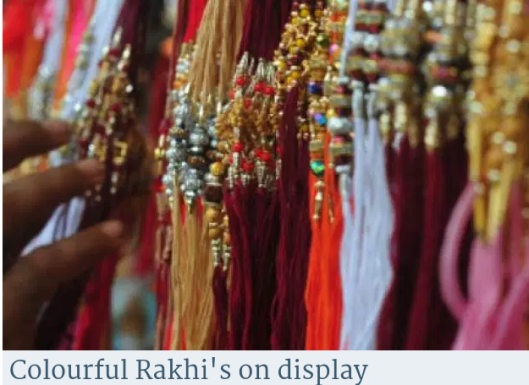 So off I used to go with mummy or daddy and pick up a nice one for my brother, as I grew older,  parting with my pocket money😧 waiting  eagerly for the rakhi day.😁

We used to celebrate it mostly in the evenings once we were back from school..

So mummy used to decorate a “Thali”  that’s is a plate, laden with the sacred Vermilion and Turmeric (we call it  “Haldi and Kumkum” ) a Lamp( diya).. 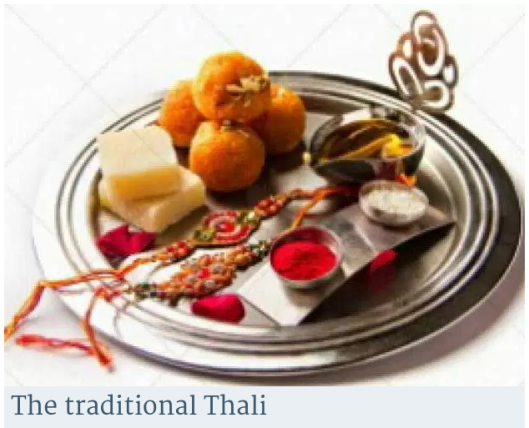 So traditionally my brother would be seated and mummy used to guide me..

It’s starts off by the application of the haldi kumkum combo on the forehead (called as a Teeka).. Followed by taking “Arti” with the lamp and tying of the Rakhi on the right wrist and feeding the sweetmeat to my brother and seeking blessings(in my case elder Bro, so youngsters have to touch the elders feet and take their blessings)

And the next step is more interesting( my favourite part…😉) as my brother would give me a gift.🎁💃💃💃

It is the custom everywhere.. That’s the best part of Rakhi for us sisters.. 👯

The gift that follows, could either be a chocolate.. 🍫(I used to get this very famous Cadbury’s celebrations box every year 🍬🍭🍫🍡🍥) and as we grew up my brother would give me money💸 to buy whatever I  want or sometimes would take me shopping and buy me stuff or even better I would choose what I want in advance as rakhi gift..😛

This happy moments after the ritual used to be followed by snacks made by mummy.🍴

So, again until next year I would wait for looting my brother legally with all rights.⏳😯

I used to send cards with Rakhi 📩when my brother was in the university and now only virtual pictures and messages 📲 as he is abroad but I don’t fail to collect my rakhi gifts every year.💝😜😜

Advantages of being a sister and that to the youngest and the little one.😝😛

It’s not just about gifts or blessings but a bond to strengthen the relationship between a brother and sister 👫 and knowing you have a brother to protect you from all harm, to help you, guide you, listen to your never ending rants and mostly be there for you in all situations, especially for some one like me who finds herself falling in all complicated situations all time.😛

My big brother is my second best and favourite after my daddy,  yes of course he is irritating at times😠 what with his never ending rules and regulations 🙈🙉🙊but still he is  awesome!!!! 😈😁